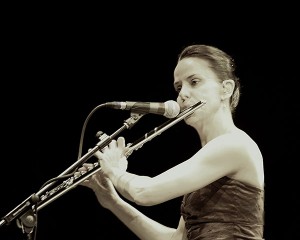 Norda Mullen was born in Savannah, Tennessee, and raised in Starkville, Mississippi, to an artistically rich parentage. She attended Interlochen National Music Camp and studied with Alexander Murray, former principle flautist for the London Symphony. She then went on to Northwestern University, where she studied with Walfrid Kujala, former piccolo player for the Chicago Symphony, and received her Bachelor’s degree in flute performance.

Norda spent the 1980?s and 90?s in Chicago and Los Angeles, playing for TV and radio commercials, movie soundtracks and critically acclaimed bands, “Cause for Passion” and “Bahu Rang.”  Since 2002 she has been performing in the touring band of the English rock group, “The Moody Blues,” with whom she has since traveled the world.

Interestingly, her initial exposure to the “Moody Blues” was as at a party given by her older siblings.  That year, 1972, the Moodies No. 1 hit was Nights in White Satin and Norda heard it being played at the party.  She was too young to be part of the party, so was sent to her room.  “So, I figured out the flute solo that I heard through the walls right then and there, and played along.”

In the mid 90?s, Norda received a call from CAA agent, Robert Norman, requesting she play some solo gigs with Justin Hayward, the Moodies lead singer. When the Moodies flautist, Ray Thomas, retired from the group in 2002, Norda was asked to fill his shoes; joining the Moodies touring band was, says Norda, a decision that took five seconds to make. She has been on all the Moodies tours since, and is featured on both of their latest CD’s “December” and “Live at the Greek,” performing a role Norda describes as a “joy and a privilege”. Norda has enjoyed an equally successful studio career in Los Angeles, having played on many major film scores including “Jurassic Park 2 and 3,” and “The Matrix Trilogy.” She calls Randy Newman her “musical mentor” and played on “Toy Story 2 and 3,” “Monsters, Inc.,” ”Sea Biscuit,” “Meet the Parents,” “Meet the Fockers,” and ”Cars.” She was also featured on Randy’s 2008 album, “Harps and Angels.”

Norda’ s self-titled solo CD “NORDA’, was released earlier in 2014 to global acclaim, and can be found on Amazon, iTunes, and CdBaby. For more information on Norda, and to hear her music and watch videos from her CD, please visit her website www.nordamullen.com.

Norda lives in Richmond-Upon-Thames, London, with her husband and their two doggies.