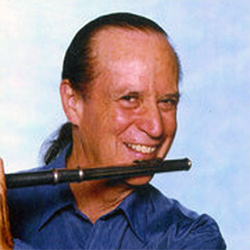 David is a former member of the American Symphony Orchestra with Leopold Stokowski, and has performed with the Boston Symphony (Seiji Ozowa, Erich Leinsdorf, and Eugene Ormandy) and Los Angeles Philharmonic (Zubin Mehta). He has appeared in recital with Jean Pierre Rampal, Roberta Peters and Victoria de Los Angeles, and can also be heard on sound tracks of hundreds of major motion pictures.

His solo recording, Chamber Music Classics for Flute, features the 2002 Grammy®-winning Angeles String Quartet and Pacific Trio. His discography also includes JS Bach: The Six Flute Sonatas, Masterpieces from the French Repertoire, The Romantic Flute (volumes one and two), Bach’s Brandenburg Concertos, and a historic recording of Terry Riley’s In C. The 2003 release by the Bel Arts Trio, of which David is a member, features the music of Gershwin, Bizet, Fauré, Rimsky-Korsakov and others.